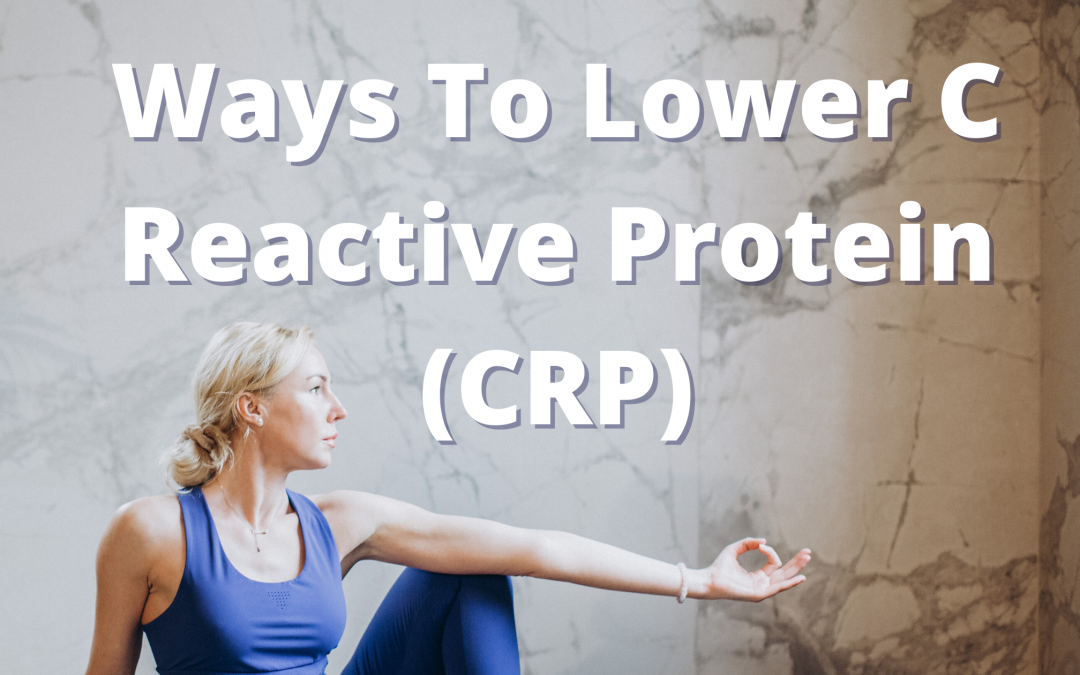 CRP is a marker of low-grade inflammation and stress that increases your risk of heart diseases. Read on to find out about the different lifestyle and dietary strategies that can help keep your CRP levels at bay.

CRP’s job is to increase response to infection, tissue damage and inflammation. So it doesn’t come as a surprise that many different conditions can increase CRP.

That’s why if your CRP is elevated, the most important thing is to work with your doctor to find out what’s increasing your CRP and to treat any underlying conditions.

Discuss the additional lifestyle changes listed below with your doctor. None of these strategies should ever be done in place of what your doctor recommends or prescribes!

In a meta-analysis of 20 studies involving 1,400 people with heart disease, CRP levels decreased after exercise. People who were worse off when they started saw greater reductions in CRP [4].

The amount of exercise needed to lower CRP levels is relatively modest. Scientists have made an estimate that the total energy expenditure needed was 368 – 1,050 calories/week [5].

However, CRP levels can also increase after exercise when the exercise is stressful and causes tissue damage. CRP levels, in this case, will depend on the duration, intensity, type of exercise, and the distance traveled by an individual. CRP increases more in exercises with more distance traveled (endurance exercise) [2].

The exercise of all-out intensity and relatively short duration, no matter what type, does not elicit a significant change in CRP for the 1-hour to 5-hour period of rest following the exercise [6].

One study found that after a marathon (42.195 Km) CRP levels were unchanged, they increased by 3.4X the next day, and after four days were back to original levels [7].

On the other hand, the CRP level after an ultra-marathon (200 km) increased 40 times and it remained at the same level up to six days after the race [7].

In those who are overweight and obese, weight loss and fat reduction were reduced CRP levels [1, 8].

One study found that the odds of achieving desirable CRP levels more than doubled with 5% loss of total body weight and fat mass [8].

Some studies suggest that total, rather than regional, fat loss are better predictors of change in inflammatory burden [8].

Other studies, however, indicate that fat stored in the abdomen and thigh muscles are associated with higher levels of CRP independent of total fat mass, suggesting that greater reduction of fat in these regions may be associated with greater improvement in CRP levels [8].

Diets high in fiber and rich in fruits and vegetables are associated with lower CRP levels, while a Western diet and diets high in fat, sugar, and refined grains can increase CRP [9].

High dietary fiber intake, in particular, has been associated with lower CRP levels [10, 11].

Light alcohol intake (1 glass/day), rather than abstention or abuse, has been associated with lower CRP levels [1, 13, 14].

In one study, moderate wine consumers had significantly lower levels of CRP than women who drank no or little wine [15].

However, the association between alcohol and CRP concentration appears to be mediated primarily by the alcohol itself and not dependent on the type of alcoholic beverage consumed [17].

Remember that alcohol in excess can have many negative health effects! Discuss your alcohol consumption with your doctor.

Studies suggest that 7 to 16 weeks (1 – 3 hrs weekly) of these “mind-body therapies” can cause significant improvements in CRP levels [18].

People who do them longer and persistently may reap better effects. When long-term expert hatha yoga practitioners and novices were compared in a study, expert practitioners had lower CRP levels [20].

However, even shorter interventions seem to be beneficial.

In one study, an 8-week regimen of yoga in addition to standard medical therapy significantly reduced CRP levels in patients with heart failure [21].

In another study, a gentle form of tai chi in patients with type 2 diabetes who were also obese decreased CRP levels [22].

Similarly, a decrease in CRP was also observed in older depressed participants receiving an SSRI when they also practiced tai chi [23].

In two studies with cancer patients, medical qigong lowered CRP levels, reduced the side effects of cancer, and improved the quality of life [24, 25].

A practice of mindfulness in faculty members of Ohio State University who had elevated CRP helped decrease their CRP levels. Although not statistically significant, at 2-months the CRP level was on average 1 mg/ml lower – a change that may have clinical significance [26].

Both walking meditation and walking exercise may reduce CRP levels in depressed seniors [28].

In a study with over 6.8k people, inflammatory markers including CRP were increased in those prone to pessimism [31].

In another study, lower self-rated health was associated with elevated CRP even among apparently healthy individuals (over 13.7k participants) [32].

Finally, in a third study, poor self-rated health was significantly associated with elevated CRP levels in over 11k women [33].

Vitamins are nutrients our bodies need but can’t produce themselves that are important for health and proper body function. When there is not enough of certain vitamins, our body starts functioning suboptimally. Some deficiencies can even have serious health consequences.

Blood vitamin C concentrations were found to be associated with lower CRP levels in both men and women, primarily among non-smokers, non-overweight women and postmenopausal women [34].

In another study, elevated CRP was associated with vitamin D deficiency in the urban elderly [36].

Elevated CRP was associated with vitamin A deficiency in multiple studies (mainly in developing countries) [37, 38, 39].

Finally, CRP was elevated in vitamin K deficiency in both seniors and young adult women [40, 41].

Discuss the following supplements with your doctor. Research suggests they may help decrease CRP levels: