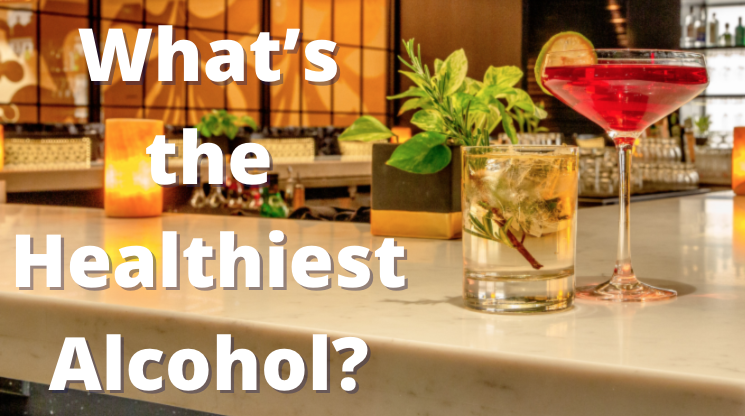 One of the most common questions about when starting a healthier diet or lifestyle is whether alcohol is OK. I also hear, “What’s the healthiest alcohol?”  What we’re really asking is, “What should I drink when I am trying to stay healthy, but want to be social?”

Let’s face it — even my most hardcore healthy people drink every now and then. There is a way to have a drink (or a few) on occasion without feeling too lousy the next day. I believe it’s optimal from a health perspective to not drink, but from a fun perspective, having a few drinks is relatively harmless.

This post distills all I know about alcohol, metabolism and toxins into practical advice you can use to enjoy a drink without many side effects. That said, this information isn’t intended for people who struggle with alcohol or want to stop drinking. Instead, talk to a professional.

Bad news first: Alcohol isn’t good for you. Shocking, I know. Alcohol has an aging effect on the body because the liver breaks it down into aldehyde, the most damaging alcohol toxin.

Adding sugar makes your drink a more, and alcohols also contain other toxins (natural or manmade) that make you feel and perform even worse the next day.

This means that if you do drink, there are better choices you can make to feel better and remain healthier. Highly filtered and distilled drinks remove toxins so your liver and kidneys don’t have to do the work. Keep reading for a handy guide to alcohols, starting with the least damaging.

Your Guide to the Healthiest Alcohol to Drink

12. Most damaging: Beer and lager

Vodka is distilled and charcoal filtered, so your body will only deal with the alcohol and no other toxins. Warning: If you mix it with sugar and other stuff, it’s no longer the best choice. Bonus points for avoiding grains entirely by going with potato vodka.

Gin is flavored by juniper berries, which have antioxidants, but not that many. 1,000 years ago, it was considered herbal medicine, but today it’s just a popular drink. Bonus points for a dry martini with olives or bacon.

Tequila is made from agave, which is high in the bad sugar fructose. But since tequila’s fermentation process removes the sugar, then is distilled and filtered, what you get is mostly pure alcohol. Bonus protein if you eat the worm.

Whiskey is made from grains, which are higher in toxins, but the distillation process still removes a fair amount of the bad stuff. Whiskeys also contain special types of antioxidants, including ellagic acid, making them better than red wine in the free-radical-fighting department. Bonus points for a real whiskey sour with fresh lime or lemon juice.

Spirits are produced by distillation, and they can be a lower-sugar alcohol choice — but it doesn’t mean they always are. These include the other liquors not yet listed and drinks like filtered sake as well. Remember: Always let the distiller filter your toxins so your liver won’t have to.

In addition to being gluten-free, cider avoids the mold toxins from grains found in beer. Apples don’t form the worst mold toxins formed by grains, and the primary one made by apples does not survive fermentation. Cider can still stimulate candida if yeast is a problem.

Champagne only comes from a region of France, and the standards for real champagne are very high. French champagne tends to have the lowest amount of mold toxins remaining after fermentation.

Dry white wine tends to be lower in mold toxins than regular whites or reds, particularly the dehydrating ochratoxin A. But it’s still unfiltered, so it contains different types of mold toxins not present in distilled liquors. Bonus points: If you can find a yellow band at the top of the bottle, the alcohol was designated for drinking in Europe and is required to meet higher standards than American imports from Europe.

Liqueurs have the benefit of being distilled, but they typically contain a ton of sugar and may also contain other inflammatory, non-Bulletproof additives. Sugar only contributes to the aging and hangover effects of alcohol, as well as adds to your waistline, so there’s no reason to crank up the sugar in your diet by hiding it in your alcohol.

The sugar, mold toxins, artificial colorings, chemicals and other additives these contain are what make these so harmful. The list is endless. There’s a chance of natural toxins forming, but you also get man-made chemicals added in — generally a bad idea when trying to feel okay the next day.

Red wine is high in ochratoxin A and yeast, and you don’t know which strains will be in your particular bottle. These both affect your body negatively. Red wine is also unfiltered so your liver and kidneys have to do all the work, and you’ll feel it the next morning even though it tastes good. Although much talked about, the amount of resveratrol in wine is so small that it’s meaningless: try dark chocolate instead!

MOST DAMAGING: BEER AND LAGER

Beer contains gluten, yeast and almost always ochratoxin A and other mold toxins. Often, the grains used are directly contaminated with mold before being fermented, making beer the dirtiest of the alcohols. If you’re going to drink beer, at least make it gluten-free — and be sure to help your body eliminate these toxins by following the recommendations below.

Steps to Minimize the Effects of Alchohol

Go to any bar and there are hundreds of options, from beer and wine to about a hundred different cocktail combinations. One of the questions I get most often is, “Which alcohol is best?”

All alcoholic beverages are going to dehydrate and cause a minor level of inflammation — it is alcohol, after all. But the type of drink you choose can make a huge difference in how you feel the next morning. Some alcohols have a lot more toxic byproducts from fermentation than others.

Tragically, beer has the most toxins of any common alcoholic beverage. Vodka is your best bet because the distillation process removes almost all of the toxins that make can make you feel lousy the next day. Your body just has to deal with the alcohol.

Before you can eliminate toxins, your body dilutes them with water so they don’t harm you on the way out. The water either comes from your tissues or water you drink — so, drink water.

I recommend drinking a glass of water for every serving of alcohol you consume, ideally at the same time or right after.

The wine industry has done a great job telling us that resveratrol is good for us. It might be — I don’t take it regularly because of concerns about it being mildly estrogenic. But even if it is, you’d need hundreds of bottles of red wine to get the amount of resveratrol in a single pill.

There is some evidence that one drink a day may have protective effects. The evidence I’ve seen is pretty vague and seems to be highly publicized by alcohol vendors, just like winemakers are big cheerleaders for resveratrol. So if you love wine, drink it — but follow the steps above to minimize its effects.