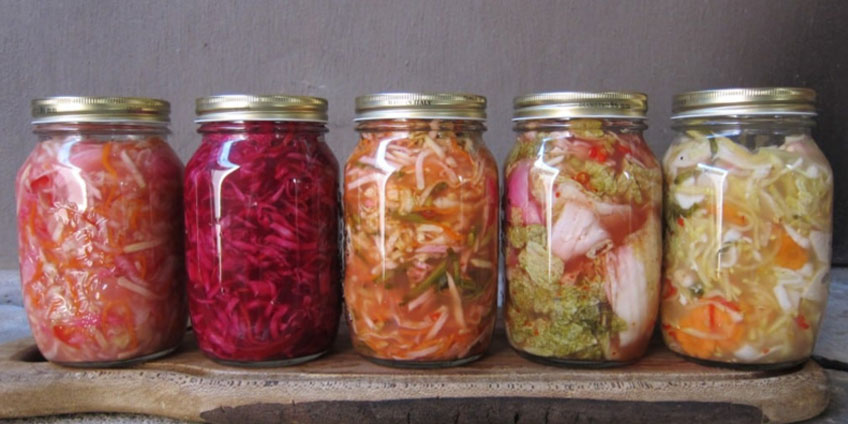 Many foods are beneficial for the gut, but some reign supreme in terms of their abundance of live microorganisms. Eating foods rich in probiotic microorganisms can help your digestive system function more efficiently and may contribute to a healthier immune system, along with many other health benefits.

Chances are, yogurt is the first food that comes to mind when you think of probiotics. While it certainly is an amazing source of good bacteria, it’s not the only one! There are a wide variety of other fermented, probiotic foods you can include in your diet to get the gut-boosting benefits you seek.

Kefir is a cultured beverage similar to yogurt, but it’s thinner and drinkable. It can be made from many types of dairy or non-dairy milk, including cow, goat, sheep, or coconut. Unlike yogurt, which is fermented using heat, kefir is fermented at room temperature. Kefir is made by adding “kefir grains,” a microbial symbiotic mixture of yeasts and lactic acid bacteria, to milk. Kefir has a slightly acidic and tart flavor, and is full of helpful microbes; it can contain anywhere from 10 to 34 strains of probiotics and beneficial yeasts.

Kimchi is a traditional Korean dish of pickled vegetables, most commonly a mix of Napa cabbage and Korean radishes and sometimes other veggies and spices. Kimchi is made by lacto-fermentation, a preservation process in which food is fermented by beneficial Lactobacillus bacteria.

First, the vegetables are soaked in a salty brine that kills off any harmful bacteria. Then, the probiotic Lactobacillus bacteria convert sugars in the vegetables into lactic acid – preserving them, increasing their shelf-life, and giving them that tangy flavor that people love. Kimchi is regarded as a rich source of beneficial bacteria. In fact, one of the bacterial species found in kimchi is named after it: Lactobacillus kimchii.

Like kimchi, sauerkraut is also shredded cabbage that has been fermented by lactic acid. Sauerkraut, however, usually ferments at a higher temperature than kimchi, resulting in a higher concentration of lactic acid bacteria and a bit of a tangier flavor. When you’re shopping for this delicious veggie at your local market, look for fresh sauerkraut in the refrigerated section. If the kraut has undergone pasteurization, all bacteria strains have been killed – even the probiotic ones. Like kimchi, sauerkraut and other fermented veggies contain several bacteria of the Lactobacillus genus, such as Lactobacillus plantarum, L. pentosus, L. brevis, L. acidophilus, L. fermentum, Leuconostoc fallax, and L. mesenteroides.

Kombucha has recently become very popular in health-food scene as both a delicious and probiotic-packed beverage. Kombucha is a fermented tea, and most types also include the addition of a little sugar or fruit juice. Think of kombucha as a fizzy, healthier alternative to soda, as it has far fewer calories and less added sugar.

Kombucha is created through fermentation with what is known as a “SCOBY,” which is a symbiotic colony of bacteria and yeast. During the fermentation process, kombucha obtains a small amount of alcohol, so consult with your doctor about whether it’s safe for you to drink during pregnancy.

It’s easy to forget that these beloved, salty snacks are one of the most commonly eaten and widely fermented foods in the world. In addition to their antioxidant properties and healthy unsaturated fats, olives also give you a burst of beneficial bacteria. After olives are placed in brine, Lactobacillus bacteria cause them to ferment. After the fermentation process, Lactobacillus plantarum and Lactobacillus pentosus are the predominant species of probiotic bacteria found in olives.

Miso, a staple of Japanese cuisine, is yet another probiotic powerhouse. It is made from soybeans, water, and koji (cooked grains or soybeans inoculated with a mold, Aspergillus oryzae, which begins the fermentation process). As the koji enzymes break down the soybeans, the simple sugars created become fodder for bacteria such as Pediococcus halophilus and Lactobacillus delbrueckii. These bacteria break down the sugar into lactic acids that contribute to the flavor of the miso. There are many varieties of miso, and each variety uniquely reflects the microorganisms native to the area in which it is made. This gives the miso an individualized flavor and sometimes a unique appearance. Depending on the type of miso, the aging process may range between two months and three years.

Before you go off to make your own miso soup, there is one important thing to note: the probiotic bacteria in miso can be killed at high heat. You can avoid destroying the beneficial bacteria by adding miso to foods when their temperatures are below boiling.

Tempeh, a fermented soybean-based product that originates from Indonesia, has gained popularity all over the world. Not only is it a source of probiotics – it is also a rich source of protein, making it an excellent meat substitute for vegetarians and omnivores, alike. This cake-like product is typically made of fermented soybeans and has an earthy, nutty flavor. During the fermentation process, the bacteria also produce vitamin B12, a nutrient that soybeans do not naturally contain. Tempeh is also a rich source of other B vitamins, such as vitamin B6 and folic acid.

What is your favorite fermented food? Join the conversation on Facebook!

Look for more personalized nutritional advice? I can help! Contact me for a consultation today.