Improve Your Sugar With These Alternatives 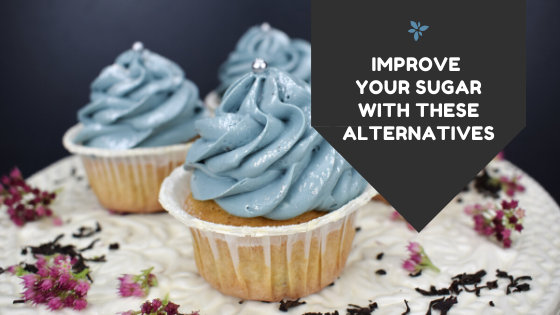 Sugar doesn’t have much of a place in the healthy anti-inflammatory diet. It throws your hormones off balance and contributes to obesity, diabetes, weight gain, heart disease, liver damage, and inflammation. That’s why high-fat, low-carb diets work so well – they support your hormones and brain and give you steady energy for hours, all while lowering inflammation (you can find the Bulletproof Diet Roadmap for free here, by the way).

But sometimes kicking sugar is easier said than done. Sugar is addictive, and a craving for a cookie at the end of a long day can disrupt the best-laid plans for a better diet. And sugar addiction aside, you’re human. You probably want a dessert now and then.

Fortunately, cutting out sugar doesn’t have to mean cutting out sweets. It’s pretty simple to swap sugar for an alternative that’s not only harmless but offers some benefits as well. Here’s a comprehensive guide to sweeteners. Experiment and find the ones that work best for you.

Sugars, the way we traditionally define them, have six carbons. Xylitol has only five, and that single carbon makes a world of difference in the way you metabolize xylitol.

Xylitol doesn’t spike insulin and barely affects blood sugar [1]. It also inhibits bacteria that cause plaque and tooth decay, whereas most sugars feed those bacteria [2]. It tastes like and behaves almost identically to sugar, too.

There is one thing to watch out for with xylitol: consuming a lot of it (50g+ in one sitting) can cause GI distress and bloating, and if you’re sensitive to FODMAPS (from leaky gut, SIBO, or Irritable Bowel Syndrome, for example), even a small amount of xylitol may cause indigestion.

For most people, though, xylitol is an excellent sweetener. You can sub it 1:1 for sugar in pretty much anything. Make sure you get xylitol derived from hardwood, not GMO corn. And never give xylitol to your dog. Dogs can’t digest it, which means even a small amount can be fatal for them.

Ribose, also known as D-ribose, is an essential body sugar that helps build the cellular building blocks of ATP, DNA and RNA (molecules that influence energy and information transfer in the body). Ribose is naturally found in small amounts in sugar, and you can also use it as a granulated sweetener. It mimics the taste of plain table sugar without spiking your blood sugar and popping you out of ketosis.

Erythritol is quite similar to xylitol. It doesn’t impact blood sugar or insulin, and those pesky plaque-forming dental bacteria can’t use it as fuel [3]. Erythritol is also easier on your gut than xylitol – it takes a huge amount of erythritol to cause gastric distress. It’s not quite as sweet as sugar, so use a little extra if you sub it in for recipes. It bakes well and readily dissolves in liquids.

Stevia is a sweet extract of the Stevia rebaudiana leaf native to Brazil and Paraguay. The sweetness is thanks to two compounds called glycosides: rebaudioside (often called Reb-A on nutrition labels) and stevioside. Stevia is about 300 times sweeter than sugar, won’t impact blood glucose or insulin, and isn’t fermentable by dental bacteria [4]. Some people find it has a bitter aftertaste, and it doesn’t taste as much like sugar as xylitol and erythritol do, but it’s a solid option if you don’t find it bitter.

Monk fruit extract is a popular sweetener in China and Thailand, where it’s also considered traditional medicine – in fact, monk fruit gets its name because Chinese monks used to be the main ones who grew the plants. Its sweetness comes from a collection of compounds called mogrosides. In addition to being 300 times sweeter than sugar, mogrosides boast impressive antioxidant properties [5] and inhibit cancer growth in mouse tumors [6]. Good stuff.

SORBITOL, MALTITOL, AND OTHER SUGAR ALCOHOLS

Xylitol and erythritol are the best of the sugar alcohols. The rest – sorbitol, maltitol, and mannitol – are cheaper to produce and won’t affect blood sugar, but they’re much more likely to cause bloating and gas in smaller doses. They’re fine if you tolerate them, but keep it to a few grams a day to avoid disaster pants. People with IBS or leaky gut should probably stay away from sugar alcohols.

Honey is a mix of fructose and glucose, which normally wouldn’t be too Bulletproof. But raw, unrefined honey contains hundreds (maybe thousands) of vitamins, minerals, enzymes, and other bioactive compounds that seem to buffer the effects of sugar. Normal sugar spikes your blood triglycerides and causes inflammation; honey actually does the opposite [7,8]. It’s relatively easy on your insulin, especially compared to any other sugar source. In general, darker honey is higher in bioactive compounds [9], so go for the darkest stuff on the shelf. Make sure it’s raw; cooking honey destroys most of the precious compounds and the result is basically sugar syrup.

These are simple, refined sugars. They don’t have any nutrients, and in high amounts, they spike your blood sugar, they cause cravings [10], they feed bad gut bacteria and impair brain function in mice [11], and they contribute to insulin resistance and diabetes. In low amounts, though, they can give your brain and muscles a quick spike of energy, which can make them useful if you’re careful with when you take them. As far as sweeteners go, dextrose and glucose aren’t the end of the world. Just use them sparingly and in small amounts.

Maple syrup has a bit of manganese and iron in it and is fairly low in fructose (more on why you want to avoid fructose in a moment). It’s not terrible, but it’s still sugar, and it will still spike your insulin. Avoid it except on special occasions. If you use it, make sure it’s 100% pure, and not the fake stuff that’s high-fructose corn syrup with artificial maple flavoring.

Coconut sugar is mostly sucrose, with a little bit of fructose and glucose. It’s basically a fancier form of table sugar, with a decent amount of added potassium, iron, B vitamins, zinc, and magnesium. It’s still sugar, though; don’t let marketers fool you into thinking their products are healthy because they use coconut sugar instead of normal sugar.

This is table sugar, also known as sucrose. It breaks down into equal parts of glucose and fructose. Like glucose, white sugar contributes to tooth decay, obesity, cravings, inflammation, aging, insulin resistance, and bad gut bacteria/yeast. If you eat it, don’t eat much.

Agave is touted by marketers as a healthy sweetener because it has a low glycemic index, but it’s actually worse than table sugar. It’s 70-90% fructose, which doesn’t spike insulin as quickly as glucose because your body doesn’t immediately recognize fructose as sugar. But fructose goes to your liver and causes fat accumulation there, damaging your liver and causing inflammation and free radical damage in a way glucose does not [12].

Cooking honey destroys most of the beneficial compounds it contains in its raw form. It’s basically sugar syrup. Avoid it.

Fructose is kryptonite. It doesn’t spike blood sugar as quickly as glucose, which sounds good at first. But that’s because fructose goes to your liver, where it triggers fat production that builds up and causes liver toxicity over time [12], as well as lots of inflammation and cellular aging from advanced glycation end products [13]. Limit fructose to 25 grams a day, and preferably far less.

Fruit juice concentrate is basically fructose with a few nutrients left in. The trouble is that it’s usually made from the fruit that isn’t presentable enough to go out on shelves, and that means it’s often full of mold and mold toxins [14].

Concentrated, supersweet fructose syrup, made from GMO corn that’s probably sprayed with glyphosate, a carcinogenic pesticide. No thanks.

Aspartame is a hotly debated topic. Some scientists say it causes cancer [15], and others say it’s totally safe [16]. Without long-term studies, it’s hard to know which is true. But given the uncertainty, aspartame’s weird chemical taste, and the fact that there are plenty of better options available, there’s no good reason to use aspartame.

But there are other problems with sucralose. A human study on the pharmacokinetics of sucralose (how it moves through your system) accounted for only 96.7% of it; the other 3.3% was untraceable [17]. Odds are sucralose is either turning into an unusual metabolite or it’s bioaccumulating somewhere in your body. Either way, it’s a little unnerving.

Sucralose damages healthy gut bacteria, and when heated it converts into carcinogenic and genotoxic chloropropanols [18]. Add in its chemical taste and the fact that you have plenty of sweeteners that not only have better flavor, but are actively good for you, and there’s no compelling reason to use sucralose.

Ace-k is a popular sweetener in diet soda. There’s not much good research on it in humans, and the number anecdotal complaints about Ace-K causing health issues has led to a demand for more research [19]. Again, why risk it? Stick with xylitol, erythritol, monk fruit extract, or stevia.

Call us today for help on your blood sugar levels!