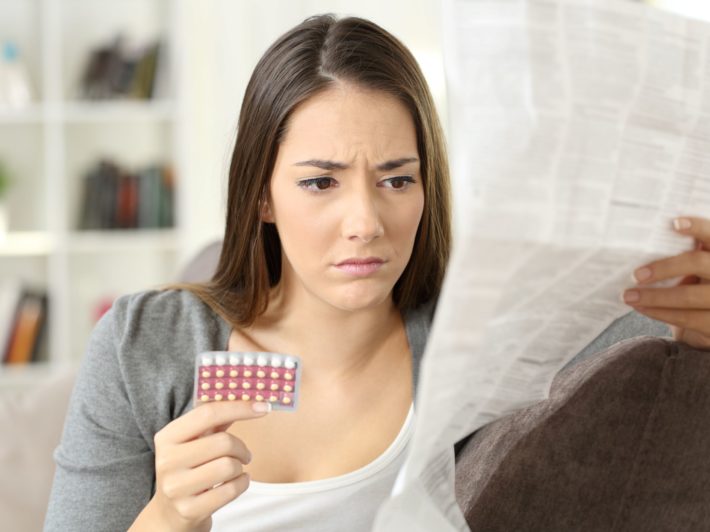 Combined hormonal contraceptives are used by over 100 million women worldwide, with the most frequent use in the Western World.1 Of hormonal options, the combined oral contraceptive pill (OCP), also known as “the pill” or birth control pill, is the most common choice, with 4 out of 5 sexually active women reporting current or previous pill use.2, 3 Although OCPs are a highly effective form of birth control and have been revolutionary for women, like other medications, they come with side effects, many of which are rarely discussed.4 It is important for us to consider the consequences that daily doses of synthetic, chemically-altered hormones may be having on our health. This is what I will explore here.

How the pill works

First, it is important to discuss how the combined OCP works. Combined OCPs have both an estrogen analogue, ethinyl estradiol, and one type of progestin.5 There are many different forms of progestins which all have slightly different properties, but the ethinyl estrogen is fairly standard.5 By adding the ethinyl group to the estrogen it alters the compound, allowing it to be absorbed better orally, but also makes it significantly more potent in the blood, with a stronger affinity to bind estrogen receptors.4 This means it acts differently from our naturally occurring estrogen. However, it is actually the progestin component that is responsible for contraception.5 The progestin works by inhibiting ovulation, thickening the cervical mucus to inhibit sperm penetration and altering the uterine lining to be unable to support implantation.5 Again, the progestins in the pill differ from our natural progesterone.6

The birth control pill is known for its many benefits, such as a reduction in mortality from ovarian, endometrial, and colorectal cancers and for improving painful periods, heavy menstruation, and acne.4 But some of the risks are well documented as well. These typically include venous thromboembolisms (blood clots), breast cancer, and cervical cancer.4 Interestingly though, the main reason women choose to discontinue hormonal contraceptives are other side effects, like mood disturbances, decreased libido, weight gain, poor bleeding control, and the fear of side effects.4 These side effects get little attention and can often be ignored by medical professionals. Thus, I want to discuss some of the less regarded side effects of birth control pills that may be having a large impact on the health of many women.

Lesser-known side effects from the pill

Nutrient depletions caused by the pill are an important topic to discuss, as they may contribute to many of the other side effects of the pill and may explain the lasting impact of those side effects as well.7 It is difficult to diagnose nutrient depletions caused by the pill, as depletions happen slowly over time and the consequences, like fatigue or low energy, are common female complaints.6 However, when nutrient levels are measured in the blood of pill-users and compared to non-users, it has been shown that there are significant depletions in vitamins B1, B2, B3, B6, B12, folic acid, C, and E; minerals magnesium, selenium, and zinc; the amino acid tyrosine and the powerful antioxidant coenzyme Q10(CoQ10).6,7 Even the World Health Organization states that clinicians should be supplementing vitamins and minerals in women on hormonal contraception as a first-line approach.7

It is still unclear as to why the pill causes these depletions. It has been speculated that the delicate cells in our digestive systems were not meant to be exposed to orally ingested, synthetic hormones, and that this impairs adequate nutrient absorption.6 Evidence also suggests that the estrogen and progestins increase the activity of liver enzymes, which require many nutrient co-factors.8 Nevertheless, nutrient depletions are common in pill-users and can be easily addressed via a nutrient-dense dietary pattern and targeted supplementation.6,7

The use of hormonal contraceptives, especially among adolescents, has been positively associated with a diagnosis of depression and the subsequent use of antidepressant medication.9 A 2005 study found that women on the pill had depression rates that were twice as high as non-users.10 Interestingly, research shows that mood symptoms are a recognized reason for discontinuing birth control pills, meaning the data may actually be underestimating the possible influence that birth control pills have on depression.4,9

There are a few ideas that have been proposed to understand this birth control pill-mood connection. First of all, about 80% of all women using birth control pills for 6 months or more have been shown to experience abnormal tryptophan metabolism, reducing their ability to make serotonin, our “happy hormone.”6 This is likely due to the depletion of vitamin B6, which is required for the production of serotonin from tryptophan.6 Furthermore, progestins have been found to increase levels of monoamine oxidase, which breaks down serotonin, only compounding this effect.9 Other nutrients that may be involved in the depressive effect of the pill include vitamin B12, folic acid, and tyrosine, which are responsible for creating neurotransmitters that regulate mood and emotions.6

A large proportion of birth control pill users experience decreased sexual desire, vaginal dryness, difficulty becoming aroused, and difficulty or the inability to achieve orgasm.6 These sexual side effects are one of the most common reasons that women stop taking the pill.6 While all progestins inhibit ovulation by interacting with the progesterone receptor, progestins can also bind to receptors for other steroid hormones, such as the androgen and glucocorticoid receptors.4 By binding the androgen receptor, the pill decreases the production of testosterone from the ovary, reducing the amount of free testosterone available.11 Testosterone is the hormone that controls sex drive in both men and women and so, a decrease will lower libido.4

Additionally, the pill acts on the liver at a genetic level, causing an up-regulation of sex hormone-binding globulin (SHBG).12 An increase in SHBG means more testosterone will be bound, and thus there will be even less free, active testosterone available.13 This explains why the pill is very effective at reducing acne, a common reason women choose to start the pill.13 A study from the Journal of Sexual Medicine found that women on the pill have SHBG levels 4x higher than never-users; moreover, even after 6 months of being off the pill, SHBG remained 2x higher, which helps to explain the long-term sexual dysfunction than some women experience after birth control pill use.14

It has been established that birth control pills have an impact on the vaginal microbiome, as it is well documented that the pill increases the incidence of vaginal yeast infections.4,15 What is not often discussed is the effect that the pill has on the gut microbiome and overall gut health. The association between oral contraceptives and intestinal inflammation was first reported in the late 1960s.16 It was found that birth control pill use was associated with Crohn’s disease, and discontinuation of the pill demonstrated resolution of the disease.16 More recent research found that the use of birth control pills is associated with an almost 50% increase in the risk of developing Crohn’s disease.17

Again, the exact mechanism remains unknown, but multiple hypotheses have been suggested. First, oral estrogen has been shown to modulate intestinal permeability, altering the barrier function of the gut.18 Secondly, exposing the digestive tract to exogenous hormones may disrupt the normal gut flora, creating a suboptimal environment.16

However, the impact of gut microbiome perturbations go well beyond merely affecting gastrointestinal health, as we now know that these microbes affect most of our physiologic functions from metabolic functions, protecting against pathogens, to educating our immune system.19 Lastly, exogenous hormone use has shown to alter the immune system responses, leading to inflammation.16 When we measure markers of inflammation in the blood, like C-reactive protein (CRP), women who use birth control pills have levels 2x higher than non-users.20 All of these effects together may lead to multifocal gastrointestinal dysfunction, but, it is not only the digestive system that will be affected by the inflammatory actions of the pill. It is now generally accepted that chronic low levels of inflammation may cause or advance many common diseases, so this effect is critical and likely wide-reaching.21

Thyroid function may also be disrupted by birth control pills and may be why some women on the pill exhibit hypothyroid-like symptoms.22 Studies show that women on the pill have an augmented response to thyroid hormones.23 In women using birth control pills, thyroxine-binding globulin is significantly increased.22 This is the protein responsible for binding free thyroid hormones in the blood, and when elevated it can greatly reduce the availability of active thyroid hormones.22 Lower thyroid hormone levels are associated with a decrease in metabolism, weight gain, sluggishness and fatigue, and increased cholesterol, along with numerous other physiological symptoms.24

The thyroid may be further affected by birth control pills due to elevated estrogen which inhibits the conversion of thyroid hormones into their active form, that is, converting T4 into T3.22 Additionally, the thyroid requires both zinc and selenium to produce and convert thyroid hormones, and as previously discussed, these essential micronutrients are both commonly depleted by the pill.6

Another interesting finding in women on birth control pills is the altered cortisol levels. When blood levels of cortisol were measured in women on the pill, there was significantly higher cortisol compared to non-users.25 Chronically elevated cortisol levels are markers of permanent stress, which means the adrenal glands are constantly working.26 This may explain why birth control pill users have an altered adrenocortical response to psychological stress.27 Moreover, the adrenal glands need B vitamins, vitamin C, and magnesium to optimally function, and because these micronutrients are depleted by the pill, the adrenals may suffer.6

Birth control pills may also aggravate insulin resistance, which is important to note, as the pill is a common treatment option for women with polycystic ovary syndrome (PCOS).28 It is suggested that long-term pill use may increase a woman’s risk of developing diabetes and heart disease.28 Although this is of greater concern in women with PCOS, who are already predisposed to diabetes and heart disease, the effect is also seen in normal women using birth control pills.28

Oral hormonal contraceptives are one of the most commonly used prescription drugs in the world, making a discussion of the potential, wide-reaching side effects (the well-known and lesser-known ones) and diverse physiologic consequences extremely important.4 Hormones are powerful chemicals that have the ability to act on virtually every cell in the body, so concern is warranted.6 Furthermore, not only do we need to be aware of the effects of exogenous hormones once they enter the bloodstream, but also when they enter the digestive system, as for almost all of evolution, women did not swallow hormones orally.6 Although the invention of birth control pills has been instrumental for women and society, proper and balanced education on the effects of “the pill” is critical, as is partnering with patients on birth control pills using a personalized medicine approach.

Are you looking for a more natural solution? I can help! Contact me for a consultation today.